Christmas Pop at the Teatro Comunale of Treviso 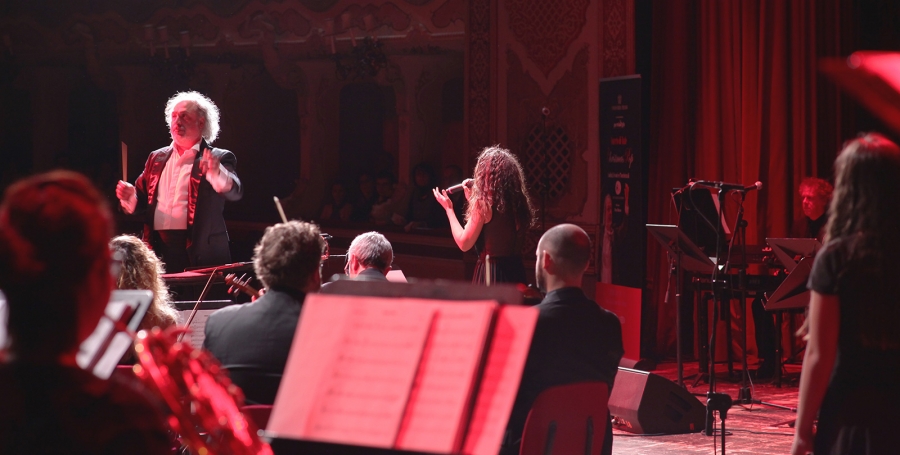 The orchestra, soloists, and singers from the Art Voice Academy perform together with Maestro Diego Basso.

Track from the Songs of Sanctuary collection by the Welsh composer Karl Jenkins. The song became popular in Italy as the soundtrack for the TV program Hello Darwin.

A famous song by John Lennon and Yoko Ono written as a protest piece against the Vietnam War. The song has become a famous Christmas classic. The music is inspired by the old folk song Stewball, which tells the story of a race horse who always drank too much wine.

Jesus born on this day

A song from the Merry Christmas album by the American singer Mariah Carey, featuring covers of popular Christmas songs and some unpublished tracks written together with composer Walter Afanasieff.

Santa Claus is coming to town

The traditional American Christmas song composed in 1932 by Gillespie and Coots and broadcast on radio for the first time on Thanksgiving Day, 1934. The song encourages a baby to behave because Santa Claus is coming.

Have yourself a merry little Christmas

A song written in 1943 by Martin and Blane and interpreted by Judy Garland in the movie Meet Me in St. Louis. Frank Sinatra did a remake of the song, which made it even more popular. The lyrics invite the listener to spend a joyful Christmas together with loved ones.

Written by Irving Berlin, it is the best-selling single in history with over 150 million copies sold. The most famous version was recorded in 1942 by Bing Crosby. The song was in the movie “Holiday Inn” starring Bing Crosby and Fred Astaire and was awarded Best Song at the 1943 Oscars.

A famous American Christmas song written in 1944 by Tormè and Wells. The most famous version is Nat King Cole’s from 1946. Lyrics describe a happy city during Christmas time.

One of the most famous and widely sung Christmas songs in the world, it was written between 1850 and 1857 by James Pierpoint with the original title "One Horse Open Sleigh".  It was originally inspired by the traditional sled races that took place in cities during the mid-1800s.

When Christmas comes to town

Written by Matthew Hall and Meagan Moore, the song became famous as the soundtrack for the movie “Polar Express”, directed by Robert Zemeckis. The film tells the story of a little boy who dreams on Christmas night of a trip to the North Pole on a magical train.

A song written in 1984 by the Canadian songwriter Leonard Cohen. It has since been interpreted by over 180 artists. The lyrics, modified many times over the years, contain many biblical references.

Do they know it’s Christmas

Song written by Bob Geldof and Midge Ure in 1984 to raise funds to combat famine in Ethiopia. In a short time, they were able to assemble many famous artists who recorded the song under the collective name of Band Aid.

I met an angel on Christmas Day

Song played for the first time in December 1999 by the Canadian singer Céline Dion during the special TV broadcast “And So This Is Christmas”. The song was immediately successful and has since been featured in many Christmas compilations.

One of the most famous English language Christian hymns from the 18th Century, it is often sung at Christmas time. The author of the track is John Newton, a former slave ship captain. The song can be considered a thanksgiving hymn to God for the grace of his spiritual conversion.

A famous Christmas song written in 1957 by Beal & Boothe, it became a Christmas classic at the end of the 20th century and was included in the soundtrack of the movie “Home Alone 2: Lost in New York”.

What a wonderful world

Written in 1967 by Thiele and David Weiss, and interpreted first by Louis Armstrong, the song immediately raced to the top of the Hit Parade. It re-emerged as a hit song again when, in 1988, it was included in the soundtrack of the movie “Good Morning, Vietnam”.

A Christmas song written originally by Cahn & Styne in 1945, it has been played many times by countless artists and has become a Christmas classic. It was included in the soundtrack of the movies “Die Hard” and “Home Alone 3”.

Also known as Cantique de Noël, the  song was composed by Adolphe Adamnel in 1847 with lyrics by Placide Cappeau. The lyrics refer to the birth of Jesus and contain references to Abolitionism. It might have been the first music track to be broadcast on radio.

A traditional English Christmas song from Cornwall dating from the 16th or 17th century, it was published for the first time in 1823. The author is anonymous, but the original arrangement and text adaptation were edited by Davies Gilbert.

All I want for Christmas

A song written by composer Walter Afanasieff and singer Mariah Carey.  The song tells the story of a girl not interested in any gifts because all she wants for Christmas is to be together with her boyfriend.

Information and reservations for the Concert
www.unindustria.treviso.it